I know I promised you a close up look at smallpox, and I’ll get back to that, but I have to tell you about a coup attempt that hits close to home.

Is it for real? Or one more excuse to eliminate opposition voices?

Billions in petro-dollars flow into the miniscule country these days, but many (most?) of the people never see a dime.

They live in poverty.

A tempting target for a coup.

Opposition leaders in my old neighborhood say that since the parliamentary election in November 2017, their members (who won only one seat in the 100-member parliament) are being rounded up, tortured, thrown into prison.

The question remains. Coup? Or excuse for another purge?

The country, the dictator, Black Beach Prison (a half-mile from my 1970 home) and more figure in my upcoming historical memoir Vaccines & Bayonets: Fighting Smallpox in Africa amid Tribalism, Terror and the Cold War

In the opening paragraphs of my memoir I write:

It was called the Cold War. The powerful hungered for more power. They eyed the resource-rich continent of Africa with its newly and soon-to-be independent countries. Russia and her allies, America and hers, China—they all purchased loyalty with aid. They fought proxy wars. The CIA, the KGB, Israel’s Mossad, and more maneuvered to outwit each other in now widely documented espionage.

In this Cold War context, Carl and I, with our two young children and our ideals, moved to West Africa, assigned first to a country that was always in the news and then to one that should have been.

The first: Nigeria. Home to one in five sub-Saharan Africans. It was embroiled in a tribal/civil war known as the Nigeria-Biafra War. The powerful chose sides. The world watched and wept.

Our second assignment: Equatorial Guinea. A tiny dot on the map, smaller than the U.S. state of Maryland. A blanket of fear muffled its screams. The powerful chose silence. The world didn’t watch, didn’t weep, didn’t even know the place existed….

If you’ve been following my blog or have read my Book Excerpts here on the website, you know that I share some tension-filled moments. All of them true. They’re from our life in West Africa, 1969-1971, with the Smallpox Eradication Program.

But the January 2018 news rings an all-too-familiar bell.

Frederick Forsyth’s coup in The Dogs of War (1974) is much more fact than the author admits. The fiction is that the book’s coup succeeds in ousting the president of Zangaro, the novel’s Equatorial Guinea. In real life, President Macias went on crushing his people for five more years.

Adam Roberts’s book The Wonga Coup is the vivid and thoroughly-researched account of the 2004 attempt to oust President Obiang who had ousted his uncle Macias. Black Beach Prison was in the future for some of those mercenaries. (Margaret Thatcher’s son Mark helped finance that ill-fated venture.)

During Obiang’s nearly four decades in power there have been multiple coup attempts, or at least the claims of such,

Obiang taking license for another purge each time.

So here we go again.

“Mercenaries have attempted to launch a coup in the Western African state of Equatorial Guinea, its government says.

“At least 30 armed men from Chad, Cameroon and the Central African Republic were arrested late last month, a minister said.

“They were found with rocket launchers, rifles and ammunition just over the border in Cameroon, he added.

“The government of President Teodoro Obiang Nguema is often accused of corruption and human rights abuses.”

The article concludes with the statement,

“Equatorial Guinea is one of sub-Saharan Africa’s biggest oil producers, but much of its population still lives in poverty.”

His democracy, his parliament

Before I continue, let me set the scene:

Since Obiang “restored democracy” he has won every election,

His party holds 99 seats of the 100-member parliament.

Excerpts from the article say,

“Even though details of the incident are sketchy, there is said to be heightened security measures across the country with reports of swoops on persons believed to be involved….

“Some political and security watchers [are] calling the report a possible move by Malabo [the capital] to purge the military and other security agencies of unwanted elements….”

“In an exclusive interview with FRANCE 24 and RFI, Equatorial Guinea’s President Teodoro Obiang Nguema spoke out for the first time about the recent alleged attempt to overthrow him. Speaking in the capital Malabo, he also reacted to last year’s conviction in absentia of his son Teodorin Obiang, in the high-profile ‘ill-gotten gains’ corruption trial in France.”

“‘I don’t think he died because of mistreatment by police,’ said Obiang, referring to Ebee Ela. ‘He was someone who was ill, maybe, someone who could die in hospital, [or] at home, but if he died when he was arrested, the police are not responsible for it,’ he said. ‘You know when someone is ill, you must take them to the hospital,’ he added.”

“A political opposition member was tortured to death in front of his party’s headquarters in Malabo, the capital of Equatorial Guinea, by state security personnel, according to an opposition leader. Gabriel Nse Obiang Obono, the head of Malabo-based Citizens for Innovation (CI) party, told RFI that Santiago Ebee Ela did not fall ill and die, in a rebuttal to an exclusive interview with the country’s president.

“‘The president didn’t tell the truth,’ said Obono, who asked for the right to respond after RFI’s Christophe Boisbouvier and France 24’s Marc Perelman interviewed President Teodoro Obiang Nguema in Malabo. [Link to French only recording ]

“’Opposition members were detained just after the elections, they tortured them after a raid on party headquarters in Malabo on December 28,’ said Obono, adding that the party counted some 200 detainees who they can name.

“President Obiang said this was not the case. ‘We can’t use that figure, it doesn’t make sense. I think it’s about 20,’ Obiang told RFI… 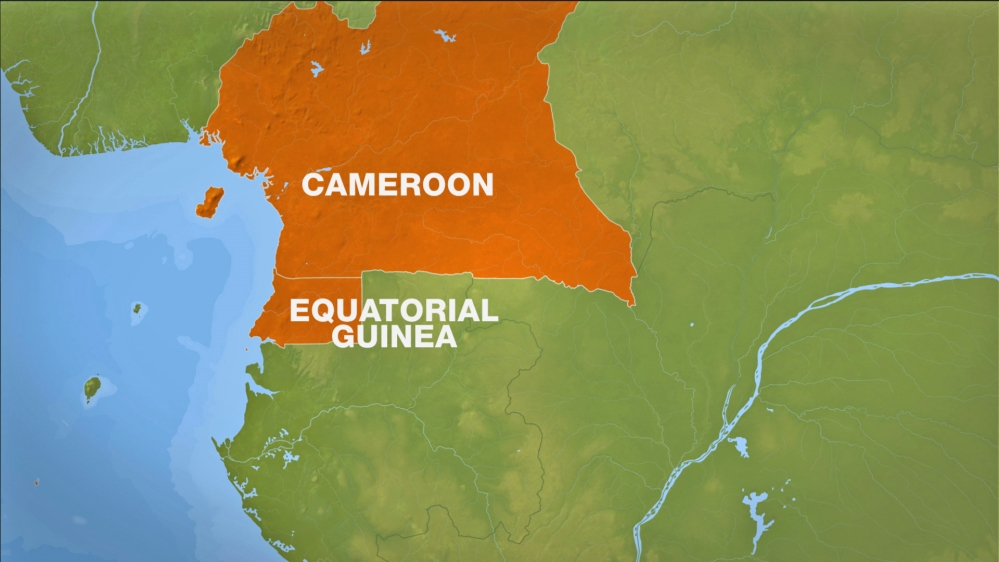 Equatorial Guinea’s capital, now Malabo, sits on the small island [red] just off the coast of Cameroon. Total land mass of E.G. is a bit smaller than the US state of Maryland.

The article references a Human Rights Watch report that “corruption, poverty, and repression continue to plague Equatorial Guinea” under Obiang’s rule. And further, that “mismanagement of public funds and credible allegations of high-level corruption persist, as do other serious abuses, including torture, arbitrary detention, and unfair trials.”

“Obiang, 75, seized power in the small former Spanish colony in 1979 and has faced a string of coup attempts during nearly four decades in office.

“Critics accuse him of brutal repression of opponents as well as election fraud and corruption.

“Equatorial Guinea has become one of sub-Saharan Africa’s biggest oil producers, but a large proportion of its 1.2 million population lives in poverty.”

1968 street map of the capital, then Sta. Isabel, now Malabo. Apprx. one square-mile. Carl and I and our two young children lived three blocks up from the bay.

The news I’ve shared with you today brings back heartbreaking memories of the suffering of the then-infant country caught in a brutal vise.

And what about Teodorin, the Vice President and heir apparent, Obiang’s international playboy son? Like his father, he appears unlikely to share the wealth.

Next time I’ll continue with the news, and also tell you a little bit about Teodorin and his toys.

Thank you for visiting my website and blog. I hope you’ll gain something of value as I continue to post the humorous, the heartwarming and the harrowing about smallpox, Equatorial Guinea and Nigeria. Topics that relate to my just-completed memoir, Vaccines & Bayonets: Fighting Smallpox in Africa amid Tribalism, Terror and the Cold War.

How does the news about Equatorial Guinea make you feel? Had you known the place existed?

SIGN UP for once-in-a-blue-moon news and events for Vaccines & Bayonets.

Go to Speaking page and book Bee to speak to your group- ZOOM BOOKINGS WELCOME.