It’s big news. Check the New England Journal of Medicine, ScienceNews, NYTimes, Forbes, Huff Post—you name it. This is huge. The FDA has approved the first-ever drug to treat variola (smallpox). But why?

(Read to the end to  5 possible reasons.)

Scientists in and out of the military started smallpox #biodefense research right after 9/11. 17 years to get to this point. Once developed, the drug was fast-tracked for FDA approval due to the urgent need.

Well, yes. We did eradicate smallpox. One of the biggest thrills of my life is that my husband, and therefore our family, was part of that historic achievement.

The disease is gone.

Fear that smallpox could return, weaponized for biological warfare, has driven the research.

“’You have smallpox,’ are three words that you never want to hear,” is the opening line of one of the news stories.

The last case of naturally acquired smallpox was diagnosed in Somalia in 1977.

Less than a year later in a medical school laboratory in Birmingham, England, a scientist nearing the end of his research on variola worked on this airborne virus without air locks and other isolation techniques.

Janet Parker, a medical photographer working one floor above the lab, came in contact with the virus. Maybe through the vent system? She was later diagnosed with smallpox.

Her parents who had driven her to the hospital and helped care for her, contracted the disease. Her father died of a heart attack as he was breaking out with the smallpox rash. Her mother survived and is the last person on earth known to have been infected with the virus.

Janet Parker became the last person in the world to die of smallpox.

The researcher slit his throat.

That was when the World Health Organization ordered all laboratories (about 75 labs had virus samples) to send all remaining stocks of variola, the smallpox virus, to one of two high-security biosafety labs, one in Atlanta and one in Siberia, to be stored under WHO supervision.

They had no enforcement authority, but everyone complied.

Or said they did.

Atlanta and Siberia – the Only Legal Labs for the Smallpox Virus

In a Biosafety Level 4 laboratory at CDC in Atlanta, bolted to the floor, tethered to the wall with an enormous chain and pad-lock, sits the liquid nitrogen freezer containing the smallpox virus.

And according to Richard Preston’s well-researched book The Demon in the Freezer, it’s under 24-hour video surveillance and is frequently moved to new secret locations within the sealed laboratory. It is often disguised—might even look like an ordinary closet.

Researchers in air-tight suits, with high-level security clearances, work on “the hot side” of the air-lock to the laboratory, working to protect us from a biological disaster. The exit from the hot zone? Only through an air lock and a 7-minute chemical shower.

Even with all of this, laboratory accidents can happen. They do happen.

Sometimes things just get overlooked. In 2014, a scientist was clearing out a cold storage room on the campus of the National Institutes of Health (NIH) in Bethesda, Maryland, and discovered something that had been left behind years before. A forgotten cardboard box. Full of laboratory vials. The labels on some vials were unreadable.

The labels on six vials were clear.  “Variola.”

Three designated personnel flew from CDC, secured the box, and flew it with its contents to Atlanta in a government plane.

One report likened the discovery to finding an atomic bomb in a drawer in a dorm room.

The biggest concern is that the virus could be unleashed on humanity once again by persons bent on destruction—mass destruction.

My late husband Carl thought that other pathogens, for example those with a shorter incubation period, would be more attractive to a bioterrorist.

Now, military and public health thinking seems to be that a person or state bent on wide-spread destruction might be stockpiling several biological weapons or even searching for ways to combine two or more. Such as smallpox with Ebola.

Buy Smallpox over the Internet?

In a 2006 investigation, The Guardian obtained 3 of the sequences of the smallpox genome by mail order. Here’s one brief quote from their detailed report.

The package, which contained a 78-letter sequence of DNA, which is part of one of the smallpox virus’s coat protein genes, was delivered by the Royal Mail to a flat in north London. The A5-sized Jiffy bag contained a small plastic phial with a tiny blob of white gel at the bottom – the DNA.

The order cost £33.08, plus an additional £7 for postage. The Guardian

Smallpox Eradication in the 60s and 70s

Many experts in the 1960s declared we could not eradicate smallpox. The barriers were too insurmountable they said.

Just to highlight a few challenges:

We have added complications today, such as greater population density and mobility. (With 2018 transportation, a deadly virus can travel from a remote jungle village to any major city in the world in fewer than 24 hours.)

5 Reasons We Need A Smallpox Treatment

All of the above and more explains why we need a smallpox treatment. Urgently!

At the end of this post are links to just a few of the stories reporting the news – the first-ever treatment for smallpox.

At www.beebloeser.com you can check out a few other pages of this website. And if you share it on your social media, thank you!!

The links I promised

This link https://www.nejm.org/doi/full/10.1056/NEJMoa1705688led me to a free preview of the New England Journal of Medicine article, “Oral Tecovirimat for the Treatment of Smallpox,” July 5, 2018. So try it if you’re interested. Or subscribe to NEJM.

The drug prevents the variola virus from infecting other cells

NO EXIT  The variola virus that causes smallpox (illustrated, DNA in red and surrounded by a protein coat and surface tubules) must release copies of itself to infect other cells. The drug tecovirimat prevents this exit, stopping the virus’ spread.

FDA Approves TPOXX To Be The First Drug For Smallpox 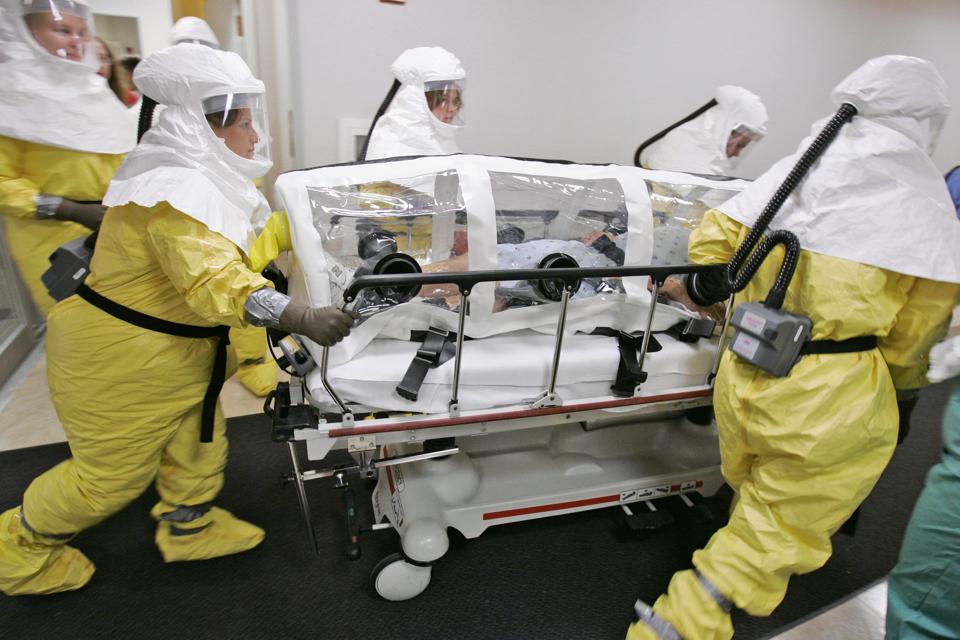 An actor-patient, made up to look as if he is infected with smallpox, is wheeled in an isolation pod during a drill at the Nebraska biocontainment unit in Omaha, Nebraska. (AP Photo/Nati Harnik)

10 thoughts on “5 Reasons We Need A Treatment for Smallpox”