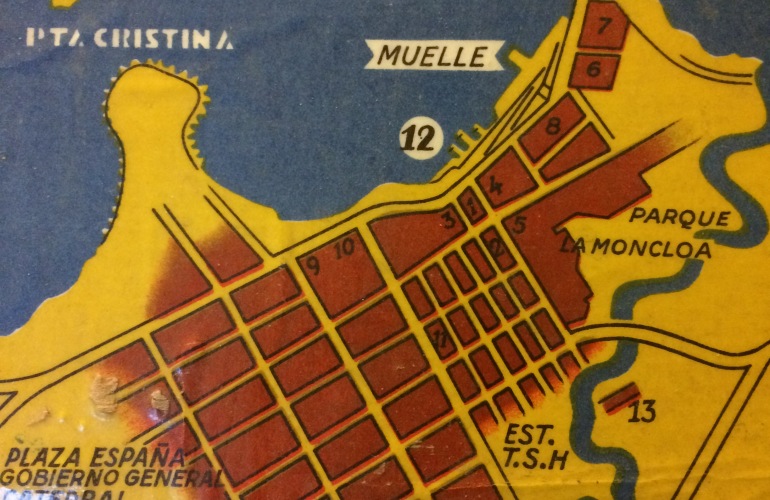 A new decree from Equatorial Guinea’s current president resurrected half-century-old memories of my life there. In fact, it’s the 7thsuch item to cross my desk this month.

News items all the way from oil-rich EG’s ranking on the U.N.’s Sustainable Development Goals for safe water and sanitation, to EG sending North Korean workers back home. When we lived there, the North Koreans were newly arrived and hanging propaganda calendars all over town. (I still have one of those calendars.)

All this current news unleashed a flood from my brain’s memory vault. I’ll focus on one news item and four memories.

Equatorial Guinea’s lawmakers have been banned from foreign travel unless authorised by Vice President Teodorin Nguema Obiang, the president’s son, according to a note from the presidency [dated July 27] obtained by AFP on Thursday….”On the grounds of national interest….”

If you’re not familiar with the president or his vice president son, you may want to read all of this short AFP article.

EQUATORIAL GUINEA IN MY MEMORY

I write about these memories in my forthcoming historical memoir VACCINES & BAYONETS: Fighting Smallpox in Africa amid Tribalism, Terror and the Cold War.

May, 1970 — CDC and USAID had transferred us from Kano, Nigeria to Equatorial Guinea, a country whose speck of mainland and islands combined could fit inside the U.S. State of Maryland and have a bit of wiggle room left over.

Our family of four brought the permanent American community to a total of six.

My husband Carl had finished his smallpox vaccination work in Kano and expected to have the Equatorial Guinea teams in the field with little delay. We lived in the capital Santa Isabel (now called Malabo) on the small island of Fernando Po (now Bioko), but most of Carl’s work was on the mainland, Rio Muni.

President Macias Nguema, the self-proclaimed “One True Miracle,” first said four of Carl’s team members could fly from the island to Rio Muni, but then changed his mind. The team would have to travel overnight deck passage ($1.07 equivalent) on the monthly sailing of the Spanish ship, Ciudad Toledo.

Carl adjusted his plans. He would field his teams by mid-July. But then, President Macias insisted no one other than he could sign for their boat tickets, which he did not do in time for a July 4 departure.

Vaccinating on the mainland had to be delayed until after the August 15 sailing.

Two weeks after arriving in Equatorial Guinea, our two young children and I were being treated to a leisurely drive from Santa Isabel down the west coast of Fernando Po to the fishing village of San Carlos (now Luba).

In the shiny brochure sent to us by USAID prior to transfer, I’d been excited to read about the thriving fishing industry and the coastal waters “teeming with fish”—“renowned for shrimp and prawns.” If we stopped for lunch in San Carlos I knew what I would order!

Let me tell you how I worded it in my story, “And Then there were Six.”

The Atlantic was on our right. Cacao fincas (plantations) and lush green rainforest hugged the road’s left shoulder, the forest creeping onto abandoned fincas. Passing a few scattered Bubi villages along the way, we covered two-thirds the length of the island in a leisurely hour. I watched for the fishing boats. Halfway down the coast road I had concluded they must all be in port at San Carlos, or maybe fishing on the other side of the island was better today.

But then we arrived at Bahia de San Carlos. Still no boats.

“Gone,” I was told. President Macias had ordered all the boats destroyed—either burned or sunk—to prevent people leaving the country.

Macias issued a fiat against Equatorial Guineans entering the homes or offices of foreigners, and enforcement was absolute.

Socially, the edict had a demoralizing impact on all of us. We had only twenty-five possible associates, most of whom were not English speaking. The diplomats could not have a gathering of more than seven people without permission from the president himself.

Months after our arrival, the edict had too personal a consequence for us. As usual, Carl was out of touch, vaccinating deep in the mainland jungles.

Who could I call? There were no foreign doctors. Macias had driven them away and expelled the nuns who worked with the hospital. We wouldn’t find a nurse or a medical assistant of any kind.

Macias had murdered or driven into exile most of his own people who had more than an eighth-grade education.

As a result, there were only two fully-trained Guinean doctors in the country.

Oh, not two. One had been arrested a few months earlier. His arrest was soon followed by the typical government story that, “Unfortunately, he died in prison.” (Happens all the time–death from torture.)

The other had just returned from exile.

Our night watchman/driver knew where the doctor lived–a short two blocks away–so I bundled Charles into the smallpox truck. I knew Equatorial Guineans were forbidden to come to our house, but desperate for any advice, I hoped the man could come out to the truck and see Charles for a few moments.

Our driver went to the door with my plea, but came back reporting that the doctor was genuinely sorry but he didn’t dare speak to us. He could not risk even the appearance of talking to us.

No doctor visits without the president’s personal approval.

Other than Pepto Bismol in my first aid kit, I was out of options.

Our son’s problem turned out to be a temporary one. I could collapse in grateful relief after the night’s ordeal.

Everything was less ominous in the daylight.  I knew now that in the event of a future medical emergency, we would need an airplane, not a truck. For me, the combination of Macias and isolation were beginning to replace the smallpox virus as the antagonist in our family’s drama.

Carl was one of only two foreigners who had a letter from President Macias allowing him to travel anywhere in the country. His work was primarily on the mainland with no way to communicate with me by phone, for days at a time.

In the final squeeze, foreigners, except for Carl and an Australian man mapping waterfalls around the world, were forbidden to travel outside the city limits of Santa Isabel, a town not much over one square mile. No driving down to San Carlos Bay or to the beach or up into the cooler air of the foothills without express permission from the president.

In effect, this meant no one left that one square-mile because asking permission invited suspicion of subversive intent.

The isolation was complete.

I leave it to you to research the differences and similarities between then and now in Equatorial Guinea.

I blog about smallpox, about Equatorial Guinea, Nigeria and Cameroon, and about writing and promoting my forthcoming book. When there’s breaking news, I’ll interrupt planned topics to share that news with you.

While you’re here today, I invite you to read previous posts and to take a look at the rest of the website.