In what looks like a tropical paradise, press reports say that dictator Obiang of Equatorial Guinea has pardoned 34 members of the opposition party, among others, to mark the 50th anniversary of his country’s independence from Spain.

The main opposition party says many of those released have been tortured.

Since the discovery of considerable oil reserves in 1996, Obiang has come to preside over one of the main oil exporters in sub-Saharan Africa, but most of the 1.2 million inhabitants still live in poverty.

The leading opposition, the Citizens for Innovation (CI) party was banned on February 26. Twenty-one of its members, including the party’s sole MP, were subsequently sentenced to 30 years in prison for “sedition, public disorder, attacks on authority and serious bodily harm.”

Another article on the subject of the pardon confirms that the one opposition Member of Parliament was among those released. They report he bears the scars of torture.

Equatorial Guinea’s main opposition party said 34 of its members were freed from prison on Monday following a pardon from strongman ruler Teodoro Obiang Nguema, but that many of them had been tortured.

Those released include Jesus Mitogo, the sole parliamentary deputy of the opposition Citizens for Innovation party which was dissolved in February.

“We are happy that our comrades have been released, although many of them bear the scars of torture,” the CI’s president Gabriel Nse Obiang told AFP.

Yes, news of the release of those opposition members is definitely good to hear.

But now from Voice of America News . . .

Activists in Equatorial Guinea alleged Monday that plainclothes security forces snatched and beat up the head of their human rights and development organization at the weekend.

Alfredo Okenve was “sequestered… [and] mistreated by security forces wearing civilian clothes”, the Center for Studies and Initiatives for the Development of Equatorial Guinea (CEID-GE) said in a statement….

UN Experts Should Take Up the Case 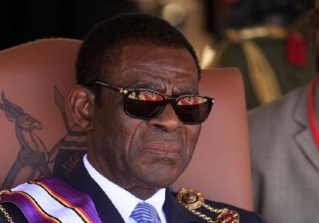 Just to prove dictator Obiang also goes after his own party and his own most trusted, here’s today’s (November 4, 2018) report out of Uganda.

Obiang’s claim of an attempted coup is once again the stated reason for a purge:

Those expelled included a former ambassador, at least two former judges and the former head of security for President Teodoro Obiang Nguema, Africa’s longest-serving leader.
They had collaborated with “a group of terrorists and mercenaries”, the party resolution said.

Obiang Nguema Mbasogo has ruled Equatorial Guinea since 1979 when he seized power from his uncle Francisco Macias Nguema.

It’s hard to believe it’s been nearly 50 years since we moved to Equatorial Guinea.

The sad country was just an 18-month-old infant. But anyone with an education beyond the 8th grade was already being brutally eliminated by Macias Nguema, its first president.

Thank you for visiting “Bee’s Articles” today. I’ve been doing some traveling and also booking additional speaking engagements. I’m glad to be back to share more about conditions in a place that is special to me. I love the place–I grieve for the people.

In my Articles, I share information about smallpox, and about Equatorial Guinea, Nigeria and Cameroon. And I sometimes give you a glimpse of my writing process and my journey toward getting my book out into the world.

My forthcoming historical memoir, VACCINES & BAYONETS: Fighting Smallpox in Africa amid Tribalism, Terror and the Cold War, reveals a time and place cut off from journalistic reporting. All newspapers and magazines were banned, journalists were denied visas, all mail was opened and read, and Spain made any mention of her former colony in the press a violation of its State Secrets Act.

Be watching for the next of “Bee’s Articles.” Stay connected.